US AT ESPECIALLY HIGH RISK FROM UNCHECKED CARBON EMISSIONS

How much economic damage does a ton of carbon pumped into the atmosphere really do? That's the question an international team of climate scientists and economists set out to answer on a country-by-country basis. While previous studies have suggested that poor countries are more vulnerable to climate change, these new results reveal the opposite--a large and complex economy like that of the US magnifies the impacts of a destabilized climate. It turns out that the US is especially vulnerable. 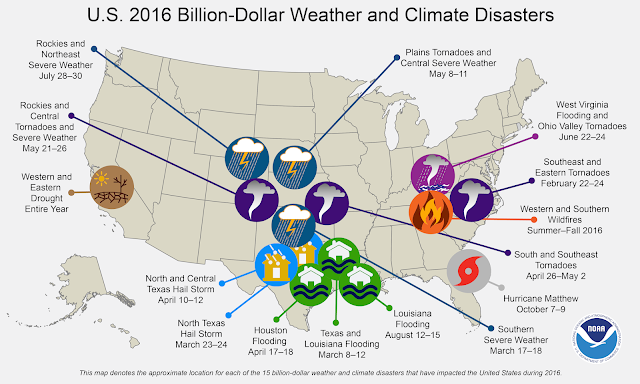 Some of the most obvious impacts to the US of a changing climate
Credit: Union of Concerned Scientists/NOAA

"It makes a lot of sense because the larger your economy is, the more you have to lose," says Kate Ricke, the study's lead author of the recent Nature Climate Change article. "Still, it's surprising just how consistently the U.S. is one of the biggest losers, even when compared to other large economies."

Other countries who will take major hits due to climate change include India, China and Saudi Arabia.

Ricke and her colleagues estimate that current levels of carbon emissions are already costing the US economy around $250 billion per year. That's nearly $2000 per US household. Even more worrisome, they point out, climate change doesn't just hit us on a year-by-year basis, it's likely to take an increasing  chunk out of America's economic rate of growth. Like a ballooning interest rate on a mortgage, the costs don't just add up, they multiply.

When the researchers take this cumulative economic erosion into account, their estimates of the long-term impact of unchecked global warming and resulting climate change are up to ten times greater than current mainstream estimates, for example those of the US government.

The authors emphasize that these higher estimates of the economic costs of "business as usual" make it clear that it's in the selfish best interest of countries like the US with highly developed economies to take steps--such as a carbon tax--that would actually match the real-world costs and help rein in global warming and climate destabilization.

In an invited commentary,  Frances Moore, an environmental economist at the University of California, Davis, writes:

"In other words, based on just their own self-interest, these countries should be acting unilaterally to dramatically cut GHG emissions. The fact that we do not see this yet suggests that damages are overestimated or costs are underestimated, that countries have not yet recognized the risk posed by climate change, or that sub-national political constituencies have been able to effectively block ambitious mitigation policies that would otherwise be in their national interest."

To those obstructionist political constituencies including, it appears, the entire Republican Party and our current president, this should be a clarion call to do what Kevin Conrad, representing Papua New Guinea, told the United States delegation to the Bali climate conference in 2008--"lead, follow, or get out of the way." 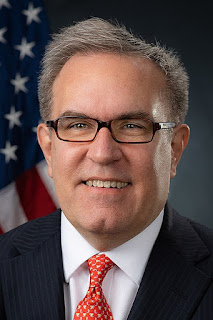 Andrew Wheeler
the smiling face of the new EPA

To coordinate these efforts, the EPA created the Office of Science Advisor. Here's how the EPA's website describes the Science Advisor's role as of 9/28/18:

The Science Advisor works across the Agency to ensure that the highest quality science is better integrated into the Agency's policies and decisions. In this capacity, the Science Advisor leads the OSA and chairs the Agency's Science and Technology Policy Council which reviews selected science issues that have implications across program and regional offices. The mission of the OSA is to provide leadership and serve as an honest broker for cross-Agency science, science policy, and technology issues.

But not for long. The EPA is planning to delete the Office of Science Advisor, ostensibly to "eliminate redundancies" and "combine offices with similar functions." The scientist who has filled the post since 1981, Dr. Jennifer Orme-Zavaleta, is an expert on the effects of chemicals and other risk factors on human and environmental health. Apparently, her expertise is no longer needed at the EPA.

Neither is that of Dr. Ruth Etzel, the head of the Office of Chilren's Health. Dr. Etzel, a specialist in children's diseases and a strong advocate for protecting children from pollutants, was placed on administrative leave, stripped of her ID, email and access to the building, and sent packing.

It's more evidence, if needed, that Trump's EPA, currently headed by Andrew Wheeler, a lawyer and former coal lobbyist, is not all that interested in the kind of inconvenient facts once provided by Drs. Etzel and Orme-Zavaleta. Protecting people and the environment has been pushed to the rear, while deregulating polluting industries has been ushered to the front. The new EPA can now freely focus on Trump's promise to advance the cause of "beautiful, clean coal."*

* That beautiful clean coal produces lots of toxic waste, including neurotoxic mercury. Now the EPA is going to make it easier for polluters to put that into the air you and your children breathe, and the water you drink.

Not to mention radiation. If you believe that a little ionizing radiation is good for you, then today's EPA is the place for you, as they also work to justify reducing radiation protection rules.

And you can now include particulates and ozone; the advisory boards dealing with both of these pollutants are being gutted or disbanded.

You can read more about these anti-science and anti-citizen steps here.

This just in (11/4/18): The EPA's website will no longer discuss climate change. I guess that for Trump's EPA, climate has nothing to do with protecting the environment.

Posted by zerospinzone at 10:09 PM No comments:

According to the Centers for Disease Control, the incidence of neurodevelopmental disorders--any of a number of brain-related problems such as attention deficit, hyperactivity or autism--increased by 17 percent between 1997 and 2008. Attention deficit hyperactivity disorder (ADHD) rose by 33 percent, while autism exploded by an astonishing 289 percent during that period.

Most strikingly, autism has continued to rise. In 2008, about one US child out of 125 was diagnosed on the autistic spectrum, while by 2018, it was one out of 59, including one out of every 42 boys.

There's still debate about whether these dramatic increases are real, or are caused by increased awareness, more access to care or changing diagnostic criteria. Those may all be factors, but it seems unlikely that they can explain a tripling in the documented incidence of autism in such as short time.

A small but growing body of research suggests that the risk of autism or other neuro-developmental disorders is increased by exposure to pesticides or other persistent organic pollutants (POPs), which may disrupt crucial steps in brain development. We all carry numerous POPS in our bodies, and they have been shown to cause a wide range of metabolic abnormalities. Given the complexity and delicacy of fetal development, and especially the development of the brain, it would not be surprising to find that these ubiquitous pollutants are at least part of the story.

Some recent research with tadpoles may shed light on this question. Although humans and frogs may seem very distantly related, both are vertebrates (animals with backbones) and share many developmental steps and basic brain features.

Sara McClelland, a biologist at Duquesne University in Pittsburgh, Pennsylvania, and her colleagues studied the impact of very low doses--1 millionth of a gram per liter of water--of the commonly-used pesticide chlorpyrifos on the brains and bodies of the tadpoles of northern leopard frogs.

As they reported in the journal Environmental Toxicology and Chemistry, exposure to chlorpyrifos caused significant changes to the tadpoles' brains. Three brain areas were impacted, areas important to vision, hearing, breathing and motor control. Those changes turned out to be independent of the pesticide's effect on the tiny animals the tadpole's feed on. 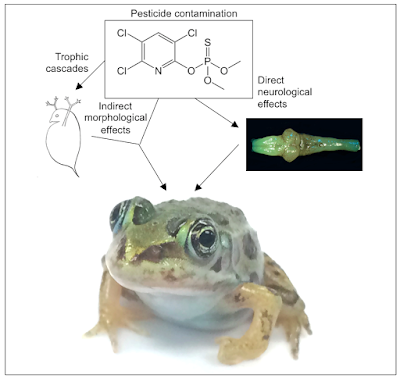 Given that chlorpyrifos is just one of dozens or hundreds of toxins that we are exposed to, more research on their human impacts is urgently needed. As epidemiologist Miguel Porta points out, "Whatever we know, whatever we think we know about the adverse health effects of a given chemical compound, and about the adverse health effects of several different compounds, simply think that it will not be uncommon for them to be--each and all--present at high concentrations in a significant minority of your patients, constituency, citizens, family or friends. And then think about the plausible negative health effects of the combination or 'cocktail' at high and low concentrations."

You can find a link to the Environmental Toxicology and Chemistry study here.

And a recent study linking a "cocktail" of pollutants to impaired fetal growth at this URL.

And click here for another recent study on the impact of toxic cocktails on brain development.

Posted by zerospinzone at 10:59 PM No comments: