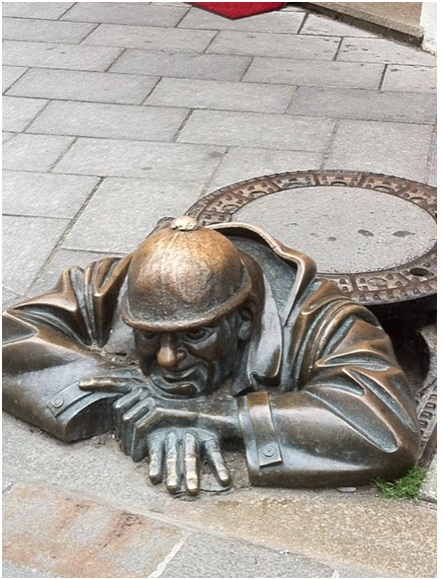 Empires of Illusion
A quirky, but striking piece of public art, leavened with a twist of Central European humor, marks a downtown street corner in the Slovakian capital city of Bratislava.
One comes across it suddenly, a life-sized bronze figure in a hard hat or helmet, head resting on hands, partly emerged from a man-hole in the middle of the sidewalk.  A peeper peeking under womens’ skirts?   A political satire on working life in this former Communist land, reflecting the old bargain that “we’ll pretend to work and you’ll pretend to pay us?  A modern philosophical reference to Plato’s Cave?  A playful reminder of the largely invisible underworld of pipes, sewers, power lines and workers it takes to sustain civilization?  Perhaps just an artistic prank designed to add a distinctive flavor and draw tourism to this newly-independent, lesser-known half of the former Czechoslovak state?
Or is it, as I’m now thinking, a larger comment about the world of illusion in which we all live, and our only partly-successful efforts to pull ourselves out of individual or collective states of unconsciousness into the clear light of day or reason?  Nearby Vienna, only a few miles up-river, after-all, was Freud’s hometown.
Often it takes a piece of absurdist art like this—or a view of staggeringly absurd political theatre like Communism in its dotage or Washington in its current debt-limit manifestation—to stop people in their tracks and cause them to reflect on where we are and what we have become.
Like the statue in the sidewalk, we’re in constant danger of being ignored, trampled or even swept away in the crowded rush of unfolding events and ever more manipulated images surrounding us.  But look more closely at his pose and what he might have to say to us.  A thoughtful, even faraway look and the curve of a curious smile animate his face.  His left forefinger is slightly raised, as if to draw attention to a point or object he wants to discuss that has just come to mind.
This is definitely not Rodin’s Thinker, fully emerged, naked, alone and lost in profound thought on his rock, but perhaps an equally recognizable human reference.  The anonymous individual, only partly visible or realized, taking time out to reflect, think, and most notably, engage in an ongoing dialogue both with unseen colleagues and with those of us willing to stop and listen.
Les Adler
for the institute
Posted by zerospinzone at 12:05 AM No comments:

Fire threatens the Arctic tundra for the first time in 11,000 years


As reported in the 24 July, 2011 issue of Nature, a research team studied the aftermath of a large, unprecedented wildfire that scorched Alaskan tundra in 2007. Tundra fires, in which the carbon-rich soil actually burns, have been small and infrequent for the last 11,000 years. This fire, however, released a huge amount of carbon into the atmosphere, as much as the entire tundra biome, which stretches across the far north of Alaska, Canada and Eurasia, stores in a year.

You can read more about this fire and its implications for climate change in the Arctic and globally at Suite101.
You can access the abstract of the original Nature article here.
Posted by zerospinzone at 2:56 AM No comments:

Last year a team of researchers managed to decode two-thirds of the Neanderthal genome. They also found that  contemporary non-Africans share more genetic markers with Neanderthals than contemporary Africans do. Their conclusion was that early modern humans interbred with Neanderthals, and that a few percent of the genes of all non-Africans come from Neanderthal ancestors.
A new, independent study, looking at one particular X-chromosome marker, confirms that finding. You can read the full story here.
Posted by zerospinzone at 11:44 PM No comments:


Writing in Science, a multidisciplinary team of researchers reports that the snowpack in the Yellowstone watershed, the northern Rocky Mountains, and the southern Rocky mountains, are all declining rapidly. They connect this with rising temperatures across the region stemming from human-caused climate change. If the decline continues, they say, it has serious implications for people, farmers, ranchers and industries across the western United States.

You can read more about this at:

Or you can find the original article at: http://news.opb.org/media/uploads/pdf/2011/snowpackpaper%5B1%5D.pdf

Robert Adler
for the Institute
Posted by zerospinzone at 4:49 AM No comments:

Debt Debate
On July 4, 2011, Riley McGowen, a 20 year old student at NG State University, was flying home from vacationing at his uncle’s ranch when he experience a life-changing epiphany.
As a new member of the Young Republicans at NG State, he had recently signed a pledge to support the proposed 28th Amendment to the United States Constitution.
The amendment simply stated:
The Government of the United States of America
shall, by spending no more than it receives in
revenues, balance its budget every year.
Riley was a double major (Economics and Political Science) at NG State, and he was proud to support a Constitutional Amendment that required the Federal Government to display the same fiscal responsibility its own citizens were.  In fact, Riley had signed an accompanying petition that was to be sent to every US Senator and Representative as well as all senior members of the President’s administration stating the obvious:

Dear _____________:
For too long, the United States Government has served as a poor example to the rest of the country. While its citizens, families, organizations and businesses do not accumulate increasing amounts of debt by borrowing money, the Federal Government continues to spend far more each year than it takes in in revenues. This must stop. The United States must be held accountable, just as all persons and private enterprises within its borders are.
Sincerely
Riley McGowen
Young Republicans
NG State University
Riley had engaged in heated arguments with his classmates who opposed the proposed Amendment, but he knew that given the unswerving support from the Republican leaders in Congress that he would win the debate.  America, like all Americans, had to balance its budget each and every year.
Members of the campus’ Young Democrats had countered by asking, “Does that mean that your uncle will no longer be able to take special tax deductions for the corporate jet he uses to fly you across the country all the time?”
Riley was outraged, “How dare you touch those tax provisions that are written into law.  Take them away and my uncle’s petroleum exploration company could not create the jobs America needs.”
But Riley was taunted further.  “Does your uncle’s company balance its budget each year?”
“Certainly.  Its shareholders and bondholders wouldn’t allow it to do otherwise.  Haven’t you taken a business class yet?”
However, Riley couldn’t seem to get away from the barrage of questions. “Aren't the shareholders and bondholders exactly the people the company is borrowing from?”
“You might say that,” responded Riley.  “But whoever invested in the company gets bonds or shares of stocks in return—so the company’s Annual Statement shows that its accounts are balanced.”
“So all you’re asking is that the US Government also issue bonds to whomever it borrows money from?”
“Hey dude, it does.”
“We’re getting nowhere fast,” interjected another Young Democrat.  “What we need to know from Riley is . . . Riley, you tell us.  Do you support the Amendment because the Federal Government is not balancing its books each year like American families have to?”
“Now, that’s the right question,” replied Riley.
“What about students (you excepted) who have to take out student loans to go to college?  Aren’t they accumulating debt—just like the Federal Government?”
“They are,” Riley responded.  “And they better be able to pay back those loans.”
“But you aren’t going to make all of us balance our budgets each year by not going into debt, are you?” asked one Democrat.
“My single mom has a car and she didn’t pay cash,” said another Young Democrat.  “Does that mean she’s making the same mistake the Federal Government and your uncle’s business are?”
“Doesn’t everybody pay cash for their car?” Riley asked.
“My parents say they own our home, but I know they took out a mortgage to buy it,” said another Young Democrat.
“It’s like I know all these people and businesses are in debt.  It’s just that the Federal Government has to balance its budget so it won’t go further into debt,” Riley responded.
“Since your Republican leadership is basing its arguments concerning a balanced budget Amendment on the idea that all the rest of us have to balance our budgets—does that mean all the rest of us will have to balance our budgets, and I don’t mean by borrowing money, each year?”
“Hey,” said another Young Democrat.  “If you’re advocating that when the Amendment goes into effect and the US Government can no longer borrow money to balance its budget, and you’re saying that all of us will have to live up to the example we are already supposedly setting for the government—that means I won’t be able to go into debt to continue my education.”
“And I won’t be able to borrow to buy a house,” said another.
“To live up to the ideals you are setting up for the Federal Government, we will need to have a cash only economy—or if anyone borrows from anyone else, they have to pay back the money by the end of the year to balance their household budgets,” said another Democrat, summing up the group’s argument.
The epiphany young Riley McGowen had that July 4, 2011 as he was flying home in his uncle’s tax subsidized private jet was that as soon as he landed he was going to reregister as a Democrat.
After all, while the US Federal debt stands at about $14.5 trillion, US citizens owe around $16 trillion of mortgage, consumer, credit card and student loan debt.  Riley realized that just like households and businesses, the goal shouldn’t be to eliminate all debt but by limiting our military ventures and tax loopholes, borrow wisely and keep it to a minimum.
Posted by zerospinzone at 11:22 PM No comments: