Persistent organic pollutants--POPS--are pervasive in the environment and accumulate in our bodies. Pesticides, pharmaceuticals and many industrial chemicals contribute to this potentially toxic tide. 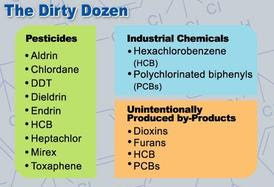 In an earlier post, I reported on findings by epidemiologist Miquel Porta and his colleagues revealing that ten percent of Americans have 10 or more different POPS in our blood at abnormally high concentrations.

Porta and his team are now studying the impacts of these long-lived organic compounds that many of us unknowingly carry in our bodies and bloodstream.

His most recent findings, reported in the American Journal of Epidemiology, reveal a strong correlation between people's toxic loads and metabolic abnormalities such as high blood pressure, insulin resistance, high blood sugar, unhealthy lipid profiles, and chronic inflammation--factors that increase the risk of metabolic syndrome, diabetes and heart disease.

Porta and his colleagues at the Hospital del Mar Medical Research Institute in Barcelona (IMIM), and the Autonomous University of Barcelona, evaluated 860 people enrolled in the Catalan Health Interview Survey. Participants included obese and normal-weight men and women from the age of 18 to 74. Statistical analyses controlled for the effects of age, sex, BMI, educational level and social-economic status. It's the first study looking at the relationship between POPs and metabolic abnormalities in  normal-weight individuals.

"The take-home message of our study," says Porta, "is that POPs contribute to cause unhealthy metabolic phenotypes as well as the metabolic syndrome."

It wasn't  a small effect--people of normal weight carrying high loads of POPs were four times more likely to be metabolically unhealthy than normal-weight peers with low toxic loads. Obese individuals with high toxic loads were 1.4 times as likely to suffer from metabolic abnormalities than those with low levels of toxins in their blood. And regardless of weight, metabolically unhealthy people carried nearly twice the load of toxins than their healthy peers.

Although we are all exposed to organic pollutants from many sources--the air we breathe, the water we drink, furniture, fabrics, food containers and many other sources, the authors point out that fatty animal foods are the biggest source, and one that we can control by what we choose to eat.

They add, however, that individual efforts to eat a healthy diet and maintain a healthy weight are only part of the solution. Government action to minimize the accumulation of POPs and other toxins in the workplace, consumer goods and the environment are also needed, as well as similar efforts by private companies.

"Individual habits play a role, but so do public and private policies," says Porta, "that is, polices of governments and companies that have been shown to decrease 'internal contamination' by POPs."

You can access the abstract of Porta's journal article at this URL.

Posted by zerospinzone at 2:00 PM No comments:

"GET ME ROGER STONE" -- A MUST-SEE DOCUMENTARY

“Get Me Roger Stone” Netflix documentary 2017

Those still attempting to make sense of how the country has reached its
current political impasse could hardly do better than viewing the new Netflix documentary,
“Get Me Roger Stone.” 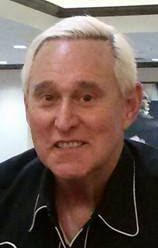 Stone, whose career closely tracks the Republican Party's evolutionary descent from Nixon to Reagan to Trump (sad) appears first as a ideologically driven Young Republican partisan in the 1970's, then a fervent Reagan campaign staffer and later big-time Washington consultant/lobbyist in the 1980's and 1990's, and most recently as a key strategic adviser to Trump's campaign team. With a history of lobbying for a variety of unsavory foreign governments, his name has currently appeared in a number of recent investigative reports and articles delving into the relationship between close Trump associates and Russian operatives during the 2016 presidential campaign.

As his public profile has risen, so has his ego, which the documentary highlights in full graphic display-- to Stone's evident delight. Like Trump himself, one of Stone's acknowledged mentors in the darker arts of politics was the infamous Roy Cohn, Senator Joseph McCarthy's chief counsel and hatchet man during the Senator's anti-Communist crusade in the 1950's. It was, in fact, Cohn who introduced Stone to Trump in the early 1980's; and Stone, who later in the decade began urging Trump to consider running for President.

Central to Stone's 'brand' has been a mastery of the techniques of negative campaigning, including character assassination, dirty tricks, disinformation and behind-the-scenes manipulation of groups, individuals and causes. In interviews, he is openly and aggressively unapologetic about his commitment to winning at all cost, using any weapons available. Unfortunately, his model seems to have been increasingly adopted by Republican leaders in Washington where policy and public interest concerns, along with any commitment to bipartisanship or shared governance have given way to the single-minded goal of defeating and demeaning the opposition. With no fixed ideology, available to the highest bidder, and certainly without shame, Stone is the perfect hired gun and exemplar of the new Trumpian world.

The documentary's chief impact, however, is its shocking revelation of just how far and how fast we have come from a world in which at least the ideals and standards of acceptable political and personal behavior in a democracy were promoted and proclaimed –if not always followed. What we are experiencing is not a new normal, but what can best be described as a 'new abnormal' in which 'alternative facts', denial of evidence, blatant lies, deliberate distortions and a generous admixture of the politics of fear have effectively undermined a sense of shared reality and trust in national institutions.

In their effort to win at all cost, freely employing the politics of personal destruction while demeaning the very instruments of democracy, Trump, Stone and their enablers have brought the nation to its current debased level of national division and crisis. Joe McCarthy and his amanuensis, Roy Cohn, have very nearly triumphed. While perhaps not explaining fully the shape of the elephant in the room, “Get Me Roger Stone” is a timely examination of a significant portion the beast.

Zerospinzone published the above piece in July, 2017. It now (January 25, 2019) appears that Stone may have pulled a few too many "dirty tricks." He was arrested early this morning at his home in Florida by heavily armed FBI agents and charged with one count of obstructing an official investigation (the House Intelligence Committee's Russia investigation), five counts of making false statements to Congress and one count of witness tampering. We'll see how Stone's notorious arrogance holds up in the face of Mueller's notorious diligence.

And today, 11/16/19, we learned that Stone has been found guilty on seven counts, including lying to Congress and witness tampering, and could spend up to twenty years in prison. Of course, it seems almost guaranteed that the man Stone mentored in the darkest political arts, Donald Trump, will pardon him.

Again, you can view the excellent Netflix documentary on Stone here.

Posted by zerospinzone at 2:35 AM No comments:

On June 19th, the Arizona Republic published this headline:

My first thought was that the tarmac had melted, but of course a modern international airport is paved with concrete, not asphalt. The problem turns out to be basic physics--hot air is less dense than cold air. That's what gives a hot-air balloon lift, but it steals lift from a plane. Every plane has a rated temperature beyond which it can't take off if fully loaded--it can't pick up enough speed to get airborne before running out of runway. 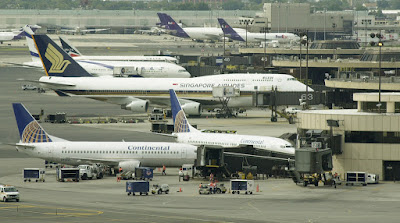 As the world warms, we can expect more planes stuck at gates
Photo credit: AP

At 120 degrees, smaller commuter aircraft were stuck in Phoenix until the heat abated, while larger, more powerful planes, like the Airbus or the Boeing 747 still had 6 or 7 degrees to spare.

Don't expect this to be an isolated incident, a new study warns. Researchers at Columbia University examined the impact rising temperatures due to global warming will have on 20 major airports worldwide, including Phoenix, Denver, LaGuardia and Ronald Reagan, in Washington, DC. As reported in the journal Climatic Change, under a "business as usual" scenario, on hot days, 10 to 30 percent of flights could be affected and airlines on average would lose about four percent of capacity.

That may not sound like a lot, but since more than 8 million people fly every day, that could mean 320,000 hot and unhappy passengers. In addition, given the slim profit margins of most airlines, that kind of loss could have serious financial implications.

And, the authors point out, those unbearably hot days may come around much more frequently as the atmosphere continues to warm. Daily maximum temperatures at major airports may rise by 4 to 8 degrees C (7.2 to 14.4 F) by 2080 under many scenarios. That would mean far more frequent and intense heat waves and far more delayed, cancelled or weight-restricted flights.

"Our results suggest that weight restriction may impose a non-trivial cost on airline and impact aviation operations around the world," writes lead author Ethan Coffel, at Columbia University.

One more non-trivial reason to take climate change seriously, and do everything we can to slow it down.

Posted by zerospinzone at 10:21 PM No comments: