Here's the bad news: unless you're under 25, your brain is shrinking. The rate of brain loss is slow at first but speeds up gradually over the years. The brain volume of a typical 75 year old is about 15 percent less than it was at its peak. That gradual loss of brain volume goes hand in hand with the decline in memory and other cognitive functions commonly seen as people age. 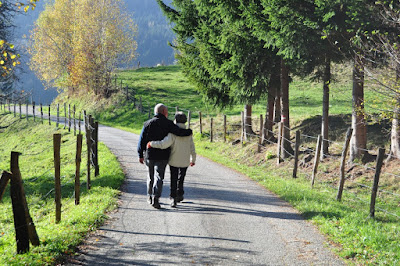 All you need is . . . to take a walk
Image source: Creative Commons

The good news is that even light physical activity--getting up, moving around, doing chores, taking a stroll, working standing rather than sitting--slows down brain shrinkage and ageing. A three-year study of more than 2300 men and women found that for every extra hour per day of light physical activity, people's brains measured more than a year younger, and the brains of people who clocked 10,000 or more steps a day were nearly two years younger than those of people who managed fewer than 5,000 steps a day.

The participants in this study were from the second and third generation of the famous Framingham Heart Study, a long term study centered in Framingham, Massachusetts, that has contributed greatly to our understanding of cardiovascular health and disease, diet and exercise. Activity was measured using accelerometers, and brain volume was tracked via MRIs.

These findings are encouraging to the millions of us--75 percent of Americans--who don't manage to meet the official physical activity guidelines of 150 to 300 minutes per week of moderate exercise or 75 minutes per week of vigorous, aerobic exercise. We can protect our brains with less intense activities.

"Every additional hour of light intensity physical activity was associated with higher brain volumes, even among individuals not meeting current Physical Activity-Guidelines," says Nicole Spartano, a researcher at Boston University School of Medicine and lead author of the study. "These data are consistent with the notion that potential benefits of physical activity on brain aging may accrue at a lower, more achievable level of intensity or volume."

The bottom line is that almost any kind or amount of daily exercise, even just an our or so of light physical activity, can give your brain the boost it needs to stay young and fit.

A computer just wrote a book. It's not a particularly catchy title--Lithium-Ion Batteries--and the author, a system called Beta Writer, isn't going to win a Pulitzer. However, it is a full-fledged, meaningful and readable book entirely written by a machine--the first but certainly not the last. 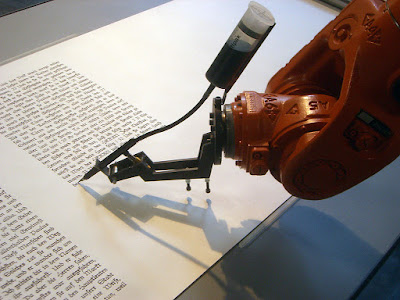 If your reaction to this news is along the lines of "what's the big deal," that's understandable. Hardly a day goes by without news that AI has equaled or surpassed us plodding humans at yet another activity once thought to require uniquely human intelligence.

Artificial intelligence systems--let's just call them AIs for short--are now as good as humans at a large and rapidly growing number of tasks, and far superior in some others, including games like chess and Go, mastery of which was once seen as one of the pinnacles of human intelligence, and highly esteemed (and highly paid) skills including sinking basketball three-pointers. This is happening so rapidly and so frequently that most of us don't even notice the next advance.

However, some heavy-duty thinkers including Elon Musk, Bill Gates and Stephen Hawking have been warning us for some time about the potentially existential risks of AI.

Gates, Musk and Hawking are not so much worried about AIs that are better than humans at one particular task or another, but about the emergence of an AI that is smarter and more capable than humans in every area. This kind of entity, they point out, could rapidly design and create an even smarter AI, which in turn could quickly improve on itself, leading to an intelligence explosion that could leave the human race, quite literally, in the dust.

Beta Writer, the system that created Lithium-Ion Batteries is pretty smart. It read thousands of scientific articles, extracted their most important findings, melded together related items, and them summarized them in readable, if technical prose. It produced the kind of comprehensive,  well organized, up-to-the-minute review of a scientific or technical field that until now would have been produced by an expert or a team of experts in a field. As such, it joins the ranks of expert systems that are matching or surpassing humans at increasingly high-level tasks. As an author myself, I can't help but be impressed. However, it's far more limited than the kind of AIs Hawking worried about.

Most researchers working on AI argue that these system, even if increasingly savvy and capable, are on the whole benign, for example helping doctors make accurate diagnoses, providing even amateur investors with high-quality guidance, and making all kinds of complex systems such as air traffic, shipping and product delivery run more smoothly. AIs are now integrated, mostly invisibly, into almost every aspect of our lives, and we rely on them whether we choose to or not. And although they occasionally do destructive things, for example the financial "Flash Crash" of 2010, or the deadly real crashes of  Boeing's 737 Max 8 aircraft, it wasn't because they were too smart or being malicious.

It's extremely difficult to predict when, if ever, an AI will emerge that surpasses humans in all of the areas that we consider important, including a deep understanding of itself and the world, emotional as well as analytic intelligence, creativity and imagination as well as problem solving. However, those who have thought most deeply about this, point out that such an entity may well have values and goals that are very different than ours.

These critics, or prophets, warn that we should be working as hard on "the control problem"--making sure that any emerging super-smart AI has the safety and security of us humans embedded so deeply into its design that it can't decide to act against us--as we are working to make AIs smarter, more capable and more ubiquitous.

All I know is that hundreds or thousands of times more money and talent is being poured into developing smarter, more capable AIs than are being devoted at that boring, but potentially vital control problem.

Earlier posts on AI and its risks:

Every so often I come across a presentation that makes something I had a vague idea about crystal clear. I invite you to dive into this great piece by Brian Resnick and Javier Xarracina on Vox. It's partly about dark matter, but it uses a series of beautifully done graphics to give us a sense of where the Earth fits into the big picture of the sun, the Milky Way and the hundreds of billions of galaxies in the known universe, all of which are dwarfed in turn by dark matter and dark energy. 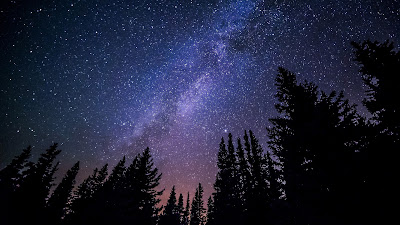 Looking up at the Milky Way--our home galaxy
Credit: Free photos from Pixabay

Please give it a click! You won't be sorry.

And to get a totally different view of the history and immensity of the cosmos, check out this new video zoom out of the depths of the Hubble Legacy Field.

Thanks to British author Brian Aldiss for the striking phrase "galaxies like grains of sand." That was the title of the American edition of a collection of some of his short stories, published in the UK under the title The Canopy of Time.