--Suggests that there are more black hole pairs than expected


--Confirms that we've entered the era of gravitational wave astronomy


Researchers representing the LIGO and Virgo consortiums announced today that their twin gravitational wave detectors recorded a second black hole merger on December 26, 2015. The discovery was announced at the annual meeting of the American Astronomical Society, in San Diego, California, and will be detailed in the journal Physical Review Letters. 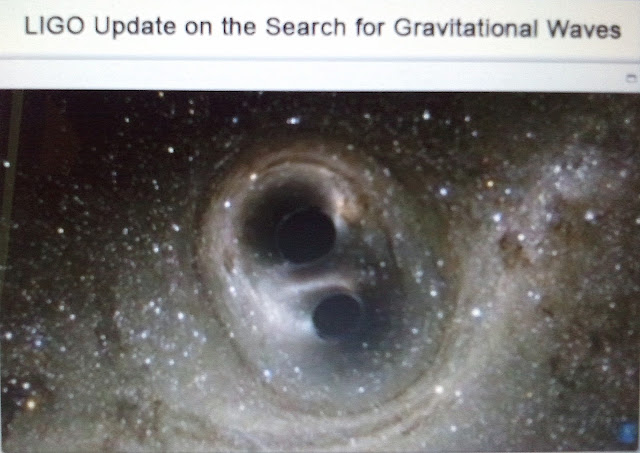 This event differed significantly from the first detected black hole merger, which took place on September 14, 2015 (see zerospinzone, February 11, 2016, below). These two black holes were very light compared to the first pair, which weighed in at 36 and 29 times the mass of our sun. The researchers calculate that the second pair of collapsed stars weighed just 14 and 8 times the mass of the sun.

Crucially, because they were less massive, their death spiral took far longer, providing the researchers with much more information. Instead of a "chirp" lasting just one-fifth of a second, this merger warped and roiled spacetime for a full second as the black holes whirled around each other 57 times before merging and falling silent. The radiating ripples through spacetime carried away as much energy as if the entire mass of the sun were instantly transformed into pure energy.


You can compare how the two mergers sound here.

Detecting two black hole mergers during the short first run of the LIGO interferometers--September 12, 2015 through January 19, 2016--implies that there are more relatively low-mass black hole pairs than expected lurking in the nearby universe. The LIGO team is currently making their twin detectors even more sensitive. So when they start their second round of observations this fall, they expect to detect many more gravitational events, eventually hundreds or even thousands per year.

A team of theorists at Johns Hopkins University, in Baltimore, Maryland, is excited by the hint that there may be many black holes in this mass range. They are exploring the possibility that these are primordial black holes, formed directly from gas clouds in the early history of the universe. If there are enough of them, they may explain dark matter, whose nature remains a major mystery despite decades of efforts to pin it down.

Researchers in the now burgeoning field of gravitational astronomy hope one day to be able to listen in on the gravitational relics of the Big Bang itself--the birth cry of our universe.

Posted by zerospinzone at 2:33 PM No comments: