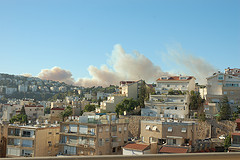 A raging forest fire early this month killed 42 people, destroyed hundreds of homes, and consumed much of the forest that carpeted Mt. Carmel, near Haifa, Israel. The deadly fire was a predictable--and clearly predicted--effect of human caused global warming and climate change, according to the author of an official climate change report that was submitted to the U.N. in the year 2000.

The 2000 report said that rising levels of carbon dioxide (CO2) and other greenhouse gases would create overall hotter and drier conditions around the Mediterranean, with delayed winter rains and a shorter rainy season, but also cause more extreme climate events such as heat waves, heavy downpours and floods. Combined, the predicted changes would significantly increase the risk of severe fires, like the one of December, 2010, threatening the survival of many forests in the Mediterranean region.

More about the 2000 report and the current comments of its co-author, Guy Pe'er at Ben Gurion University, at this Suite101 page.

Robert Adler
for the institute

avandia
Posted by zerospinzone at 6:49 AM No comments:

An Aspirin a Day Keeps the Doctor Away

It's well documented that taking low doses of aspirin every day reduces the risk of heart attacks and strokes. That's why millions of people worldwide are prescribed their daily baby aspirins.

A new analysis combining the results from eight long-term studies of the effects of low-dose aspirin now finds a significant reduction in deaths from a variety of cancers, most notably those of the digestive tract, but also cancer of the brain, lungs, prostate and pancreas.

Overall,taking low-dose aspirin for five years or more appeared to reduce the overall death rate from cancer by more than 20 percent.

You can read a summary of these findings on Suite101.

And, if you're interested, you can read the original paper in The Lancet.

Robert Adler
Posted by zerospinzone at 10:35 AM No comments:

When I worked as a neuropsychologist, I got to see first hand how even mild cognitive impairment could wreak havoc in a person's life. Of course Alzheimer's disease or other full-fledged dementias are even more destructive.

That's why a recently published study linking long-term pesticide exposure to cognitive impairment and, the researchers suspect, upping the risk of a person developing dementia, caught my attention.

You can read a summary of the research, which tracked over 600 French vineyard workers over time, on Suite101, by clicking here.

And, if you want, you can download the original article, in the journal Occupational and Environmental Medicine, at this URL.

Robert Adler
Posted by zerospinzone at 3:06 PM No comments: