FUEL ON A FIRE--HOW CLIMATE CHANGE MADE HURRICANE HARVEY WORSE

Just a quick link to an important piece by climatologist Michael Mann detailing the ways in which global warming and climate change added destructive power to Hurricane/Tropical Storm Harvey:

The factors Mann details include sea level rise (compounded by subsidence from oil drilling); warmer surface and deep waters in the Gulf which added to the energy/intensity of the storm, the storm surge it caused, and the amount of water it dumped on land; and the fact that it stalled over Texas, producing those all-time-record-breaking rainfall totals.

In the absence of meaningful action to control climate change, we're going to see a lot more of these "once-in-a-thousand-year" disasters.

Posted by zerospinzone at 2:39 AM No comments:

WHERE IS E.T.? ASTROPHYSICIST THINKS TECHNOLOGICAL CIVILIZATIONS DON'T LAST LONG, AND WORRIES WE WON'T EITHER

With President Trump and North Korea's Supreme Leader, Kim Jong-un engaged in a nuclear-armed chest-thumping competition, and the Bulletin of Atomic Scientists' Doomsday Clock now just 2 and a half minutes before midnight, the possibility that our civilization may annihilate itself is hard to deny. And that doesn't count the risks from climate change, biodiversity loss, runaway artificial intelligence and other human-caused developments.


If we're in this fix just 350 years after the start of the Scientific Revolution and just 7 decades into the Atomic Age, how much longer can we reasonably expect our vaunted but fragile civilization to last?

Not all that long, says Daniel Whitmire, a retired astrophysicist now teaching mathematics at the University of Arkansas. Whitmire bases his argument on one of the long-established principles of philosophy and science, the principle of mediocrity.

The principle of mediocrity makes the reasonable assumption that we're more likely to observe or experience common events than uncommon ones. This idea has helped us to recognize that Earth is not the center of the universe, that our solar system is just one among billions in our galaxy, and that the Milky Way is just one of hundreds of billions of galaxies in the observable universe.

Whitmire points out that if most technological civilizations last hundreds of thousands or millions of years, our few-hundred-year experience with technology would be very atypical. However, Whitmire calculates, if most technological civilizations last no more than a few thousand years, we would be typical, falling in the middle 95 percent of the distribution, although among the youngest.

The implication from the most likely distribution--most technological civilizations don't last very long, say 500 years or so.

Five hundred or a thousand years may seem like a long time from the perspective of a human lifespan, but it's extremely short compared to the age of the Earth and the Earth's biosphere. Whitmire notes that, left to itself, Earth's biosphere can be expected to survive for at least another billion years. If humans (or other technological species that might evolve here) went extinct, but didn't damage the biosphere in the process, there would be time for many subsequent civilizations to evolve. But that would again make us, as first-timers, atypical.

Of course, we can always hope that we're not just a typical technological civilization, but one that's smart enough not to annihilate ourselves along with Earth's biosphere. That would be great, but if we follow Whitmire's logic, the odds are against it.

---------------
You can access Whitmire's article in the International Journal of Astrobiology at this URL.

You can read a slightly different but very clear exposition of these ideas here.


Posted by zerospinzone at 10:22 AM No comments:

TRANSLATE CLIMATE SCIENCE INTO ACTION? NOT WHILE TRUMP'S IN THE WHITE HOUSE

The researchers who leaked the National Climate Assessment in early August did so out of fear that the Trump administration would censor or simply refuse to publish the report--the product of years of work by 13 federal agencies.

Trump has already proved them right by shutting down the advisory committee charged with evaluating and translating the assessment's scientific findings into action.

It's not as though action on climate change isn't urgently needed--the assessment found that temperatures are rising rapidly, especially in the western US and the northern Great Plains; the Atlantic seaboard can expect more destructive hurricanes; California can expect more droughts; the Northeast can expect more deluges and floods; coastal cities will suffer more flooding as sea levels rise; and the risk of irreversible climate tipping points is growing.

With Trump in the White House (or at Mar-a-Lago), and Scott Pruitt in charge of the EPA, the US will not just be ignoring climate change, it will be moving full speed in reverse.

Click here for an update on this from Grist.

If you enjoyed this post, please sign up for email alerts from zerospinzone.blogspot.com
Posted by zerospinzone at 3:27 AM No comments:

Here's a quicklink to a Cleantechnia,com story about how South Miami is coming to its senses about global warming, climate change and, especially, the region's risk from rising sea levels and storm surges. It's the first city outside of California to mandate solar panels on all new homes.


While our leaders at the federal level continue to march backwards with respect to climate change and its impacts, cities like South Miami and states like California and New York are, of necessity, taking the lead.

Posted by zerospinzone at 11:38 PM No comments:

Climate scientists have been concerned about the risks from rising sea levels for nearly 50 years.

That a warming climate will raise sea levels makes intuitive sense--water, including all the water in the world's oceans, expands as it warms, and melt water from glaciers, ice sheets and the Antarcitc ice cap will of course end up in the oceans.

Although the pace of sea level rise seems small, on the order of a millimeter per year, its impact is multiplied by higher tides, stronger storm surges, sea-level-rise hotspots, and by the fact that 634 million people, close to ten percent of the world's population, live in low-lying coastal areas. The US is among the top ten countries with large numbers of people at risk from sea-level rise.

Pinning down the rate of sea level rise has proved to be challenging (see "Sea level measurement" at this URL). Now, however, a team of researchers has used sophisticated statistical techniques to deal systematically with the sources of uncertainty in different sea level data sets. "This likely is the first time a group of statisticians have had really close examination of sea level data," says Andrew Parnell, at University College Dublin.

Their approach allowed them to trace sea level changes over the past 2000 years, with increasing accuracy as more, and more accurate, data have become available in recent decades.

The group found that from 1 AD through 1800 AD, global sea levels rose by much less than one millimeter per year. They began to rise more rapidly at the start of the Industrial Revolution, and are currently not just rising, but rising faster and faster. They estimate that globally the rate is now 1.7 millimeter per year.

In terms of potential impacts, the East Coast of the US is at particularly high risk. It happens to be one of the sea level rise hotspots. For example, sea level near New York City is rising by 3 millimeters per year, putting more than $25 billion of infrastructure at risk. 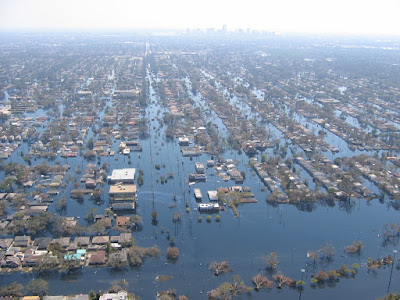 Parnell and his colleagues presented their new findings at the 2017 Joint Statistical Meetings, in Baltimore, Maryland.

Posted by zerospinzone at 2:22 PM No comments:

ORWELL STRIKES AGAIN, THIS TIME AT THE US DEPARTMENT OF AGRICULTURE

In his prescient novel, 1984, George Orwell introduced the world to Newspeak, a minimized and simplified revision of English designed to make nuanced, reasoned, independent thought impossible.

Inspired by our current president and his climate-change denial, the U.S. Department of Agriculture (USDA)--the agency whose mission is to guide and enhance American agriculture, conserve and improve the rural environment, and help feed America and the world--has decided to outlaw phrases such as "climate change," "climate change adaptation," "reduce greenhouse gases," and "sequester carbon." Newspeak is alive and well at the USDA. 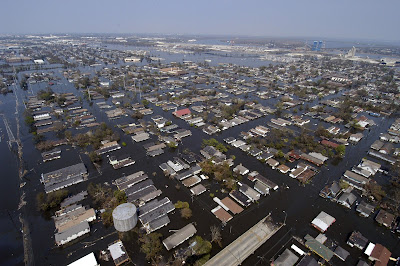 
In Oldspeak--plain old English--it's at least possible to think and speak clearly about the global problem of climate change and ways to minimize or adapt to it. But, in Newspeak, in Trump's Department of Agriculture, that's now a thoughtcrime, or, better yet, simply unthinkable.

The flash drought that's currently decimating the high plains' wheat crop is simply an isolated weather extreme. It can't be linked to the raging wildfires in the Pacific Northwest, flooding in New Orleans, the fact that Virginia's Tangier Island is washing away or that Death Valley just experienced the hottest month ever measured anywhere on Earth. The concept that ties these "weather extremes" together no longer exists, at least at the USDA.

You can see this in action at the EPA, where scientists explaining how climate change has added to the destructive power of Hurricane/Tropical Storm Harvey are being accused of politicizing the storm. In other words, understanding is politicizing. Remaining ignorant is the right thing to do. 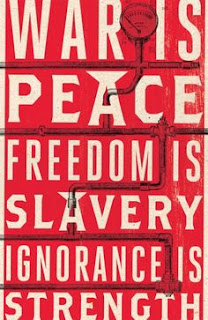 One of the three guiding slogans of the Party in 1984 was "Ignorance is Strength." If that's true, Trump's USDA is certainly flexing its muscles.

You can read environmentalist Bill McKibben's comments  on this issue here.

You can read about an outbreak of Trump-mandated Newspeak at the Centers for Disease Control and Prevention (CDC) here, or at this URL.Newly banned words and phrases include "vulnerable," "entitlement," "diversity," "transgender," "fetus," "evidence-based," and "science-based." I, for one, start to feel pretty vulnerable when concepts like "evidence-based" and "science-based" are banned. What will replace them? The Republican party line? Trump's latest whim?

And you can see how far this fascist penchant for censoring words and ideas can go in this recent news item about the censorship of words, phrases and internet search terms in China. Just to put the cork in the bottle, they've banned references to George Orwell, 1984 and Animal Farm.

If you enjoyed this commentary, please sign up for email alerts for new posts on zerospinzone.blogspot.com (right column above).


Posted by zerospinzone at 3:58 PM No comments: