One of the central challenges at this moment in history is homing in on the truth in the midst of a tumult of half truths, false news, spin-doctoring, propaganda, weaponized disinformation and outright lies.

Two recent events brought this home to me.

The first is the subject of my previous blog, "The big picture--the history, size, shape and shape of Russian disinformation." The New York Times video that I summarized in that post demonstrates that "Russiagate," Russia's use of stolen and leaked documents, troll farms and social media to stir up discord and influence the 2016 presidential election, is just the very sharp tip of a huge iceberg of "active measures" or disinformation dating back to the Soviet Union during the depths of the Cold War and continuing today. In addition to tilting the electoral balance and  likely handing the presidency to Trump, in personal and practical terms, this ongoing, multi-decade campaign means that almost any piece of news or information one comes across may truly be "fake news"--a targeted distortion or flat-out lie perhaps cunningly wrapped around a bit of truth to make it more palatable.

If you haven't seen the video, please click here and take the time to view it.

The second eye-opener came from the rapidly advancing field of artificial intelligence (AI). The high-tech company NVIDIA, which specializes in graphic processing, has perfected a neural network that generates convincing portraits of people who've never existed.* Here's an example: 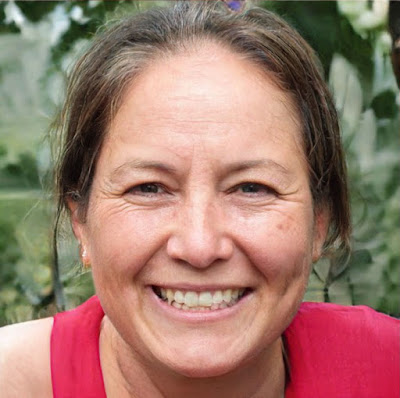 In other words, as hard is it is today to try to figure out if a news story is factual or an analytic or opinion piece is at least fact-based, telling truth from lies is going to get a lot, lot harder, and soon.

There's a famous quote of uncertain origin--"A lie can travel halfway around the world before the truth can get its boots on." I think many of us would agree that recent history provides convincing vindication of the idea. The quote, however, needs to be updated in this age of the internet, 24-7 news cycles, social media and individually-tailored feeds of news, ads and come-ons. Perhaps a more up-to-the-minute version would read, "A swarm of lies can go viral and encircle the globe in minutes or hours, drowning out the truth completely."

I think it's vital to realize that it's not just other people who are the targets and victims of manipulation, disinformation and increasingly sophisticated fake news; it's all of us. Whether you're on the right receiving the latest reason to "lock her up" or on the left hearing about ICE's latest outrage at the border, an evangelical hearing that God has hand-picked Trump to save the US or a non-believer being provoked by the same story, we all need to realize that, like geese being fattened to make foie gras, we're being force-fed a diet that suits someone else's agenda, but is almost certainly not in our own best interest.

As FACEBOOK is discovering now that it belatedly tries to cut down on hate speech and disinformation, highly charged, sensational posts are the ones that generate clicks (and revenue). "As content gets closer to the line of what is prohibited by our community standards," says CEO Mark Zuckerberg, "we see people tend to engage with it more." And as their army of 20,000 fact checkers and content reviewers is finding out, making this kind of call is extremely hard. To get a sense of the size of this problem, Facebook says that it deleted 1.5 billion accounts between June and November of last year, and WhatsApp says it's deleting 2 million accounts every month to try to stop the flow of fake news.

I don't pretend to have a formula, an algorithm, or even much of a clue how to determine if what I'm reading or viewing online is truth or lies, meaningful argument or weaponized propaganda, especially as the purveyors of disinformation get more and more sophisticated and have more and more powerful tools at their disposal.

My alarm bells go off if a story seems too good to be true, or too bad--meaning that it too neatly confirms my preconceived views. In that case it probably is the information equivalent of junk food.  And I'm determined to tune out pretty much anything that tries to bypass my brain and push emotional buttons--communications using terms such as "urgent," "crisis," "demand," "decimate," or  "eviscerate" (button-pushers I found in just one page of emails).

No doubt these steps are just a start, but given how toxic a diet of lies can be, I'm determined to up my game. What about you?

*As with all things digital, the rate of progress in this area is astonishing. As of 9/20/19, a company is now offering a collection of 100,000 convincing computer-generated faces online, for free, for any use.


xx
Posted by zerospinzone at 9:46 PM No comments: