This week two climate researchers warned of a particular threat to the western United States from global warming.

Writing in the 25 June, 2010 edition of the journal Science, Jonathan Overpeck, at the University of Arizona, and Bradley Udall, at the University of Colorado,say that the impacts of global climate change are already being felt throughout the West,as shown by soaring temperatures, the worst drought since systematic records were started, reduced spring snowpack, reduced river flow and reduced water storage in the region's reservoirs.

In addition, they point out that tree ring data show that America's West is prone to episodic mega-droughts that can last not for years but for decades.

Rather than waiting for more studies and more data to determine if the current drought conditions are natural, man-made, or a witch's brew of both, Overpeck and Udall say that planners and decision makers throughout the region need to identify and develop ways to adapt to significantly hotter and drier conditions.

A "no regrets" approach to planning requires that steps be taken soon to make the region and its burgeoning population sustainable within the likely range of climatic conditions during the next decades.

On a more positive note, the authors cite the region's vast potential for solar, wind and geothermal power production. Tapping these green resources, they say, may help the region pay for the inevitable costs of adapting to years or decades of drought.

For more details, click here to see my Suite101 story on this subject.

Robert Adler
for the institute

Chimps kill their neighbors—now we know why
Since Jane Goodall first described it in 1979, scientists have known that chimpanzee bands make organized raids into neighboring territories where they attack and kill chimpanzees from other groups. What they didn’t know was why.
Some researchers speculated that the goal of these raids was to seize territory; others thought that it might be a way of recruiting females from a victimized group into the raiders’ band. Some anthropologists argued that such attacks only took place in chimp communities that had been disturbed by human interventions such as providing food.
Researchers Sylvia Amsler, a biological anthropologist at the University of Arkansas at Little Rock, David Watts, at Yale University in New Haven, Connecticut, and John Mitani at the University of Michigan in Ann Arbor, say that they’ve proved that the goal of this form of chimpanzee aggression is to take over territory.
They describe their findings in the June 21, 2010 edition of Current Biology.
Amsler and her colleagues studied a large band of chimpanzees—the Ngogo group—in Uganda’s Kibale National Park for more than ten years. They observed dozens of organized raids, usually by large numbers of adult and adolescent males, although occasionally with females as well. The Ngogo band’s raids were focused on a region to the northeast of their home range.  In ten years of what the researchers refer to as “patrols,” the Ngogo chimps killed 21 individuals from that neighboring band.
That represents a very high mortality rate—some 5 to 17 times higher than has been measured among human hunter-gatherer societies, and 23 to 75 times higher than what’s been seen in other chimpanzee studies.
The researchers identify two factors that may account for this unusual rate of violence and killing. The Ngogo habitat is unusually rich, so the band has grown to some 150 individuals, about three times larger than the average chimpanzee band. That means that there are a lot more adult and adolescent males available to form large and successful raiding parties.
Amsler and her colleagues believe that their findings rule out the theory that chimps only kill each other as a result of human interference. They point out that neither the Ngogo band nor its neighbors have ever been provisioned by humans, and that the raiding they’ve observed is clearly adaptive. The Ngogo band has increased its territory by some 22 percent at the expense of its neighbors. As a result, more of its members are likely to survive and reproduce.
Although the chimpanzee raids are eerily similar to human intergroup aggression and violence, the researchers are reluctant to discuss any linkage.
They do speculate, however, that the high level of within-group cooperation that lets chimpanzees form these patrols and carry out lethal raids on their neighbors may tell us something about the evolution of high levels of cooperative behavior within human groups.
It would be ironic if the researchers are right, and that it was our primate ancestors cooperating among themselves in order to compete aggressively with outsiders that made us as cooperative as we are today.
Journal reference: John C. Mitani, David P. Watts and Sylvia J. Amsler, “Lethal intergroup aggression leads to territorial expansion in wild chimpanzees,” Current Biology Vol. 20 No. 12.
For a more in-depth read, click here to see my Suite101 story about this research.

Robert Adler
For the institute
Posted by zerospinzone at 12:44 PM No comments:

A new round has been fired in the long-running controversy about who first settled the Americas.

An international team of researchers compared the shape of more than 1100 skulls from South America, Asia and Australo-Melanesia dating from 11,500 years ago to the present. They found that they could account for the marked differences between the skulls of early and more recent Americans only if there were two founding waves of migration from Asia separated by several thousand years. 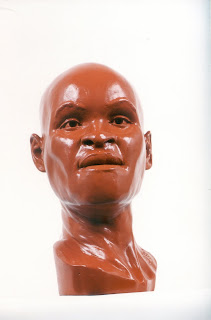 Luzia, facial reconstruction by Dr. Richard Neave of 10,500 year old skull from Lagoa Santa, Brazil, published with permission from LEEH-IB-USP
Their conclusions disagree with recent genetic studies, most of which conclude that just one wave of migration from eastern Asia can explain the genetic diversity of American indigenous groups.

Katerina Harvati, a paleoanthropologist at Eberhard-Karls University in Tübingen, Germany and one of the lead authors of the new study says that their results make the one-entry model improbable and refute the widely accepted argument that the differences between early and more recent indigenous Americans can be explained by genetic drift or other evolutionarily neutral processes.

“The two-migration model is the only one whose predictions matched the observed differences,” Harvarti says.

Morphing Skulls through Time and Space

Harvati, along with Mark Hubbe, at the Catholic University of the North, in Chile, Walter Neves, at the University of Sao Paulo, Brazil, used previously published measurements of 1178 skulls, including 69 from South America that were older than 7000 years—the largest sample ever studied--as the basis for their analysis.

Researchers have pointed out since the 1990s that the skulls of the earliest Americans, or Paleoamericans, differ markedly from those from more recent times and those of current indigenous groups, or Amerindians.

Harvati and her colleagues found that for Amerindians to have descended directly from Paleoamericans would have demanded a very unlikely rate of change of skull shape “For the [one migration] scenario to have been true there would have had to have been some unique circumstances and strong selection pressure different from selection to climate,” says Harvati.

The one-entry model also predicts substantial correlations between how close two sets of skulls are geographically and how similar they are in shape. In contrast, if nearby populations descended from different founders, that correlation breaks down.

Ted Schurr, a molecular anthropologist at the University of Pennsylvania, finds the study worth paying attention to. Although his own genetic studies have suggested that a single expansion from Northeast Asia can explain the genetic variation among Native Americans, he does not rule out the group’s conclusions. . “I am willing to accept that there were pulses of migration into the Americas from Northeast Asia at different times, such that a pattern which Hubbe et al. identify might emerge,” he says.

Dennis O’Rourke, an anthropologist at the University of Utah, in Salt Lake City, Utah, agrees. “More recently, a number of genetic analyses have demonstrated that two, and perhaps more, migrations are more likely given the current understanding of genetic diversity in the Americas,” he says. “Contrasting the results from morphometric and molecular studies is one way to sharpen our perspective and refine hypothesis for future tests.”

It’s those further tests that Harvati and her colleagues hope to spur. “Currently there seems to be a gap in our understanding of the peopling of the Americas,” says Harvati. “I hope that our work will prompt others to revisit these questions with renewed interest and will help resolve that gap in our knowledge.”

For a more detailed description of this research, click on my Suite101 article here.
Posted by zerospinzone at 2:15 PM No comments: