Just six weeks ago I posted about Google quantum AI guru Hartmut Neven predicting that quantum computing would grow at an unheard-of doubly exponential rate, and that the long-sought benchmark of quantum supremacy would be reached sometime this year. 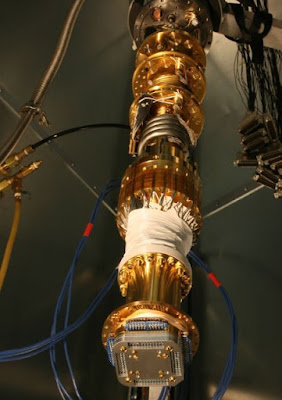 True to Neven's predictions, word has filtered out that Google has submitted a scientific paper reporting the first demonstration of a quantum computer solving a problem that even the most powerful classical computer can't manage--the hallmark of quantum supremacy. Reportedly, the problem Google's 54-qubit computer solved in 200 seconds would have taken a supercomputer 10,000 years to do.

One caveat--the problem was a very specific task known to be particularly well suited to a quantum computer. Much more work is needed before quantum computers will be able to tackle a full range of real-world problems. However, those developments will almost certainly happen much sooner than most people imagine.

This milestone is important in itself, meaning that scientists in every field, cryptographers, AI researchers, etc., will soon be able to tackle tasks that were previously impossible. However, what really demands everyone's attention is that easily-missed prediction, now known as Neven's law, that progress in quantum computing is going to unfold at a doubly exponential rate.

"To our knowledge," the Google team writes, "this experiment marks the fi rst computation that

can only be performed on a quantum processor. Quantum processors have thus reached the regime of quantum supremacy. We expect their computational power will continue to grow at a double exponential rate."

You can get a sense of what this astonishing rate of change means in my earlier post, "Forget Moore's Law. Neven's Law Rules Now." The bottom line is that we can expect as much progress in quantum computing in the next five or six years as we've seen in the digital world over the past five or six decades. After that point, all bets are off. If you think that the digital revolution has been earth shaking, just wait for the quantum revolution.

Well, we're in that new world now. It's going to make words to describe the rate of change, such as "breathtaking," "jet propelled" or "explosive" seem far too slow.

Robert Adler
Posted by zerospinzone at 11:05 PM No comments:

IS IT NARCISSIISM, CORRUPTION, OR BOTH?

In my post of May 19, 2017 entitled "L'etat c'est moi--Trump's identity problem," I argued that given Trump's blatant narcissim, he would inevitably come to see the presidency and the government as extensions of himself, with which he could do as he wished:

"It's no secret that our current president has the same proclivity [narcissim]. From his point of view, it's his country, his military, his secrets to share or withhold as he wishes, his realm to do with as he pleases. The Constitution, the rule of law, checks and balances, Congress and the courts are irrelevancies that had best get out of his way." 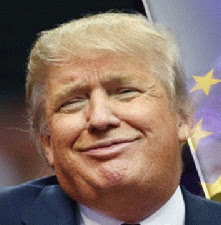 Nothing could illustrate this more clearly than the unfolding whistleblower scandal involving Ukraine. If what's being reported turns out to be true, Trump used the office of President and the coercive power of the United States to attempt to strong-arm a foreign government into an investigation to dig up dirt on Joe Biden and his son.

Joe Biden, of course, is Trump's most likely opponent in the 2020 elections, an opponent who, even according to polling by Fox News, leads Trump 52 to 38.

The fate of Ukraine is of importance to the United States. It would be totally appropriate for the President to negotiate forcefully with it, for example, to get it to reduce corruption and strengthen it's democratic institutions. However, using it as a cat's paw to dredge up dirt on a political opponent is not just inappropriate and possibly illegal, it is, or should be, an impeachable offense.

It's also worth noting, that Trump appears to be a repeat offender in such matters, having just dodged a bullet by Attorney General Barr's mealy-mouthed interpretation of the Mueller Report, which was  the result of a multi-year investigation into Trump's use of political ammunition provided by, and possibly coordinated with Russia, targeting Trump's previous opponent, Hillary Clinton.

What isn't clear is whether this pattern represents pure corruption--the conscious, willful breaking of laws and norms for his own political gain--or pathological narcissim, a narcissism so profound as to blind Trump even to the possibility of separating his own needs from our nation's priorities. It would still be corrupt, but might represent the kind of distinction that criminal law makes between, for example, premeditated murder and vehicular manslaughter.

My bet is that Trump, in his narcissism, feels 100 percent justified in using the Presidency and the powers of the United States any way he pleases.

Unfortunately, that doesn't make what he has done or is likely to do any less dangerous to all of us.

Ever since election day, 2016, I've joked about how I (and everyone reading this now) were bumped into an alternative universe, one where Trump became president instead of Clinton. Here's how it happened: 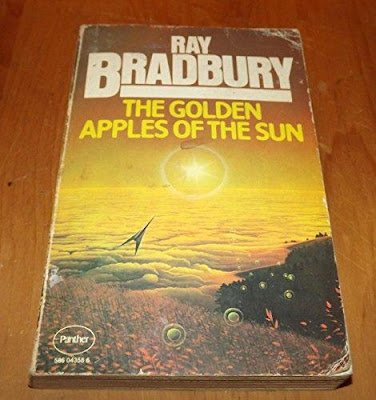 A group of us were vacationing in San Luis Potosi, Mexico on election day, 2016. I got permission from the management of the hotel we were staying in to connect my laptop to the large-screen television in their breakfast room so that we could livestream US channels and watch the election results come in.

We settled in with some drinks and were chatting happily as we watched the first returns get posted. As you remember, the polsters and pundits were quite sure that Hillary Clinton would win, and those early returns seemed to point the same way.

Then, without warning, a huge storm blew up. Rain was pouring down, a blast of wind smashed open an outside door and sheets of water blew in, flooding the floor. The downpour continued along with blasts of thunder and lightning, and within a few minutes the electricity and the wifi feed went off.

The hotel staff lit some candles to give us light, and we hunkered down for the next hour or so until the storm gradually abated and the power and the internet came back on.

You guessed it. By the time we could tune into the election results again, the votes from the midwest were coming in and Trump was winning. The storm, it seemed, had blown us into a different universe.

Now I realize that my feeling of having been transported into an alternate world may have been seeded by a science fiction story that I read nearly 60 years ago.

With the help of the internet, it didn't take long to find the story, called "A Sound of Thunder," wirtten by Ray Bradbury and first published in Collier's Magazine on June 28, 1952. I read it a few years later in a collection of Bradbury's short stories, The Golden Apples of the Sun, published in 1953.

The story is set sometime after the year 2055, one day after a US presidential election in which Keith,  a man who " . . . will make a fine President of the United States," defeated the dangerous Deutscher,

"If Deutscher had gotten in," Bradbury writes, "we'd have the worst kind of dictatorship. There's an anti everything man for you, a militarist, anti-Christ, antihuman, anti-intellectual."

We learn that time travel is now possible, and that Eckels, the story's protagonsit, has contracted with  a company that will take him on a  hunting excursion back to the age of the dinosaurs with the aim of bagging a Tyrannosaurus Rex. It's explained that the company has targeted a particular T. Rex that would have died by natural causes seconds later, so as not to change anything in the past. His hunting guides also emphasize that Eckels absolutely must stay on a floating metal pathway, again to avoid making an inadvertent change to the past that could reverberate in unpredictable ways back to the future.

Unfortunately, when confronted by the actual tyrannosaur, Eckels panics and stumbles off the metal path back to the safety of the time machine.

When they get back to the present, things are subtly, subliminally different. In particular, a sign that had been written in good English before the trip back in time is now written in a crude pidgin. Eckels scrapes the mud off his boots and finds a single crushed butterfly. Bradbury writes:

"It fell to the floor, an exquisite thing, a small thing that could upset balances and knock down a line of small dominoes and then big dominoes and then gigantic dominoes, all down the years across Time. Eckels' mind whirled. It couldn't change things. Killing one butterfly couldn't be that important! Could it?"

Eckels fearfully asks who won yesterday's election. The company representative laughs and says, "You joking? You know very well. Deutscher, of course! Who else? Not that fool weakling Keith. We got an iron man now, a man with guts!"

For me, it took a huge thunderstorm. For Bradbury, all that was needed was a butterfly.*

*For a discussion of how Bradbury's story may have contributed to the famous "butterfly effect," from chaos theory, check out this Wikipedia entry.


Posted by zerospinzone at 1:47 PM No comments:

As the ancient Romans already knew (remember "a sound mind in a healthy body"?), physical and mental fitness are connected.  Now, two millenia later, new research may tell us why.

Dr. Jonathan Repple, at the University of Muenster, in Germany, and his colleagues were able to study over 1000 MRI brain scans of healthy volunteers, with an average age of 29. They supplemented the scans with a test of physical endurance and a dozen cognitive tests. 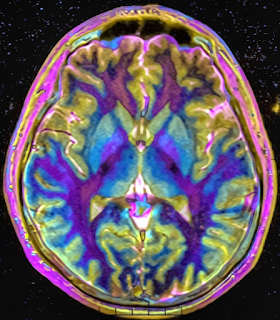 As has been shown in previous research studies, the researchers found that physical fitness and cognitive functioning were strongly correlated.  What was new was their finding that this correlation was mediated by the integrity and connectivity of the white matter of the subjects' brains.

(This finding makes subjective sense if you consider how much of our thinking consists of making connctions.)

The researchers didn't expect to find such a strong relationship between physical fitness, brain health and cognition in healthy young people. "To see this happening in 30 year olds is surprising," Repple says. "This leads us to believe that a basic level of fitness seems to be a preventable risk factor for brain health."

Still, this correlative study could not determine is whether improving people's fitness will improve the health of their white matter and/or boost their cognitive performance. "We see that fitter people have better brain health," says Repple. "So we now need to ask whether actually making people fitter will improve their brain health. Finding this out is our next step."

Stay tuned. And in the meantime, just in case, stay fit.

You can find the research paper, White matter microstructure mediates the association between
physical fitness and cognition in healthy, young adults; at:https://doi.org/10.1038/s41598-019-49301-y 1


Posted by zerospinzone at 10:45 PM No comments:

Today’s headlines (NYT August 25) about President’s Trump’s ‘fantastic’ new trade pact with Boris Johnson reveals what last week’s flap about Trump’s effort to ‘purchase’ Greenland may have really been about:  It was, in fact, a brilliantly conceived deception for the truly historic action being negotiated behind the scenes for the purchase of post-Brexit England! 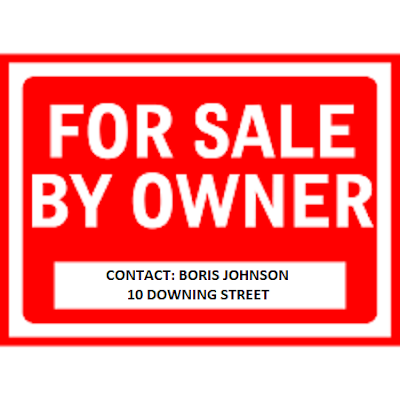 We all fell for the ‘fake news’, as expected, since nothing the President tweets or demands from day to day is beyond belief. The advantages of a fire-sale rescue of Great Britain just as its economic value reaches rock-bottom after a likely ‘no deal’ exit from the EU could not have escaped the calculating mind of our Deal-maker-in-chief. Imagine--‘Fortress Americans’ and ‘Little Englanders’ together again, reuniting their Anglo-Saxon heritage. Such a deal!

Les Adler
Posted by zerospinzone at 10:56 PM No comments: