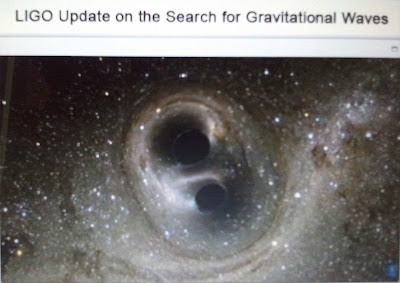 It took a century. In 1916, Albert Einstein predicted the existence of gravitational waves – ripples in the fabric of spacetime. Today, a worldwide consortium of researchers announced the first detection of this fundamental phenomenon, confirmed through measurements made by two exquisitely sensitive instruments in Louisiana and Washington.

"Einstein would be beaming, wouldn't he," said Gabriela Gonzalez, spokesperson for the LIGO consortium.

This epochal discovery not only demonstrates the phenomenal power and reach of Einstein's General Theory of Relativity, it also opens up a whole new way of studying the universe, something we'll be hearing much more about -- gravitational astronomy.

The crucial observation took place on September 14, 2015, when the two huge detectors of LIGO, the Laser Interferometer Gravitational Wave Observatory, one in Hanford, Washington, the other in Livingston, Louisiana simultaneously recorded ripples in spacetime that increased in frequency and intensity and then subsided over the course of one-fifth of a second. Those waves precisely matched what Einstein's equations of general relativity predict for the final moments of the death spiral and merger of two black holes. 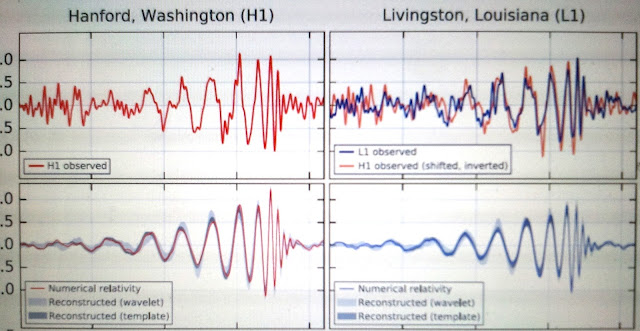 You can view a simulation of two black holes merging at this URL.

“These waves were produced by two colliding black holes about 1.3 billion years ago, and detected by LIGO, the most precise measuring device ever built," said Reitze. 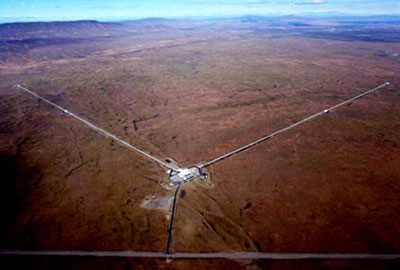 The LIGO interferometer in Hanford, Washington. Each leg is 4 km (2.5 miles) long

Researchers tell us that during the last moments of the black hole merger, the amount of power roiling spacetime was greater than all the light being emitted by all the stars in the observable universe. Even though the energy released by the merger was enormous -- as much as if the mass of three suns were converted into energy in a fraction of a second -- by the time the signal reached Earth, it was incredibly faint, distorting the 4-kilometer long arms of the LIGO detector by just one thousandth the width of an atomic nucleus. It took 40 years of research and engineering to build detectors able to measure such miniscule spacetime distortions.

"Each of these black holes are about 150 km in diameter," said Reitze. "Pack thirty times the mass of the sun in that. Accelerate it to half the speed of light. Then take another like that and collide them together. That's what we saw here. It's mind boggling."

The researchers who announced the discovery said that this was the dawn of a new era in astronomy and our understanding of the cosmos. Since gravitational waves have been roiling space since the Big Bang, Advanced LIGO and its successors may allow scientists to listen in on the earliest moments of the the birth of the cosmos. They will also open a window on the strangest and most violent events in the universe, such as the merger of two neutron stars, and help researchers to home in on the mysterious dark energy that is speeding up the expansion of the universe.

"LIGO is a fantastic beginning," said Kip Thorne, one of LIGO's co-founders. "It has opened a new window on the universe. Every time a new window has been opened up there have been surprises. Gravitational waves are so radically different [from light and other electromagnetic radiation] that we will see big surprises, perhaps even bigger than we've seen through the radio and x-ray windows."

Remarkably, the frequency of the "chirp" produced by the merging black holes lies in the range of human hearing. You can hear it yourself here. If you listen carefully, you can hear the gravitational-wave signal getting both louder and higher, exactly as predicted as two colliding black holes rock the surrounding spacetime just before merging into one.

Posted by zerospinzone at 8:55 AM No comments: